Start a Wiki
Apis (originally from One Piece) is a Christian girl who lives in Water 7, and is Numbuh 777 of Sector W7. She was given the nickname "Babbling Saint" by her leader and best friend, Chimney. She is the Animal Telepath of that sector, and is therefore the only member that can understand Gonbe. She is mainly friends with Chimney and Aeincha.

Her Negative is Sipa, a Satanist and Nerehc's girlfriend.

Apis grew up as a Christian, and was deeply in love with the religion as a child. However, when she was 4 years old, she inhaled Bang Gas and acquired Animal Telepathy powers. This was the first of many things that began to spark her doubt in her religion. When she attended CND Training, she met several kids who were descended from gods (i.e. the Uno kids, Roberts kids), further increasing her doubt.

While playing with Chimney one day, a tiny Lilliputian girl named Aeincha walked up to them, wanting to play, and they accepted her. At 7 years old, they attended CND Training and met a Nimbi named Aisa. They graduated and came to be Sector W7.

In Down in the Negaverse, the Nega-W7 team comes into the Posiverse through Apis's mirror as her Negative, Sipa brainwashes her with Imperio. She uses Apis to sneak herself, Ahcniea, and Ahcom into Moonbase, changing the Christian into a turtle while she goes to talk with Panini. They return to the treehouse as Sipa changes Apis back.

She appears with the others in Viridi's Last Stand, participating in the War on Flora. She didn't do much after their train crashed in the Nature Factory.

In Sector W7, she reads a parody of the Bible throughout the story. In her own chapter, she thinks about why someone would want to parody the Bible, thinking their Christian beliefs are false. Later, she goes down to the city for Sunday Church, meeting her grandfather at St. Ryu's Church. After they read the opening prayer, Grandpa Bokuden calls Apis up to read from the Bible. She tries to, but she couldn't, as she has too many doubts about her religion. She runs back to the treehouse, thinking about when she began to doubt their Christian beliefs, because of hearing of all the other gods. Gonbe comes to Apis, and after a talk, Apis decides to head down to her house, meeting with her grandpa. Bokuden explains when he met Chimney's grandma, Kokoro, who was a mermaid woman. He explains that Apis shouldn't turn away her beliefs, and she must be strong about them, and Apis learns to do so. They return to the church, so Apis could read from the Scripture. In the 5th chapter, Apis does battle with Paula Doublefinger as they battle the Teen Ninjas to take April back home.

In Operation: CLOWN, Apis accompanied her sector on the journey to Punk Hazard. When Aisa's foot was burned by some acid, Apis had to carry her for a while. In the battle against Vergo, Apis seemed to be the less proficient against him, but they were victorious in the end and escaped Punk Hazard.

Later, during Meet Your Match Day, Sipa returned to hang out with Apis. They sat in awkward silence before Sipa mentioned how she used magic to turn a priest gay. Apis left without another word.

In Operation: NECSUS, Sector W7 is joyed when Mocha joins their team during the ceremony on Moonbase. They return to the treehouse as Mocha tries to settle in. She sees Apis playing Legend of Zelda and wants to play, but accidentally ruins the controller as she was too big to handle it. Apis and friends later apologize to Mocha for getting angry with her. Apis later accompanies her team to Amazonia when Nebula needs Mocha's help, and remains there until they have to go to Reepor to save the main group. Sometime after they return to Earth, Maddy Murphy invites the sector to her slumber party.

In Chimney's Friends, Apis had a picnic with her friends after the others' fight with Chimney, and when Chimney joins, Apis wants them all to say grace, much to Chimney's annoyance. When Chimney eats the Skypian apple and shrinks, Apis mentions how she kinda likes her better that way because of her attitude. But when Chimney sneaks into her room later, Apis is praying to God for Chimney to get back to normal, and is willing to give up her powers to do so, but Chimney angrily protests this. Chimney proclaims she doesn't want Apis praying to a god that isn't real, let alone pray for her sake, and while Apis was angered at this, she knew Chimney didn't mean it deep down. When Chimney is kidnapped by Alexei and Suigetsu, Apis and friends attack the Teen Ninja rig to rescue her. During the battle, Apis is thrown into the sea, but summons a giant seasnake to save her. When a group of Teens surround her, she looks at some potted plants nearby and communicates with their cells, causing the plants to grow uncontrollably and trap the Teens.

In The Great Candied Adventure, Apis and friends become worried at Cheren's news of the Apocalypse.

In Legend of the Seven Lights, Sector W7 greet Mary Goldenweek when she comes to Water 7, and the girls takes interest in Apis's Bible studies. The team later helps take Sector V and Sugar to Solana Galaxy on the R.O.C.K.E.T.-T.R.A.I.N., saving Meloetta before going to Symphonia. Apis joins her friends in invading the Star Train to save Maddy, struggling to control Pipo Monkeys because of their helmets. For a time, April gave Apis blue paint to make the latter stronger. When the R.O.C.K.E.T.-T.R.A.I.N., and Chimney with it, end up shrunken, Apis prays for a miracle when they have no way off. She subconsciously summons the space-whale, Mobius Dick, and jumps into its mouth first before her friends. During their voyage inside Mobius, Apis happily engages conversation with the whale. Mobius later drops them all off on Peoples α, where they meet Professor Büe. After Zach Murphy changes Chimney and the train back to normal, they use it to return to Earth.

Later, Sector W7 is called to retrieve a Mega Footbomb from Arlen, Texas's NFL Stadium. At the stadium, Hank Hill traps her and Aisa in his RealGrass Gas trap, but Aisa saves them both by feeding them Black Skypian Apples. Apis uses her Cell Telepathy to make the grass grow beyond proportion, then Aisa defeats Hank Hill herself. The next day, the sector participates in the Battle of Washington, and they attend Nigel Uno's funeral the day after. The next day, Apis shows Mary the game, Zelda: Spirit Tracks, teaching her how the DS works. When Mary shows them a picture of her parents, Apis notices how the parents don't look a thing like Mary. After April wakes up from her nap, she wishes for them all to visit the Guertena Gallery in Germany. They all fly to Mary's mansion and have lunch with her parents, during which Apis cough-asks if Mary's adopted. Her parents deny this claim, though they have considered adoption once.

The next day, Mary's parents drive them all to the Guertena Gallery, where Apis explores with Aisa. They end up lost in the cursed gallery, wandering to a Yellow Area where Apis's eyes get half-erased by an eraser painting. Aisa helps her out of the room when a giant cat bursts in, and her eyes return to normal afterwards. Apis helps Aisa walk, as her foot got injured, and they are knocked out by a gas trap before falling into a pit. They reunite with Mary as they solve the gallery's puzzles, eventually regrouping with the others. They learn that Mary was a painting from the gallery and April was a doll woven by her, and are upset that the two will have to stay here.

They find a secret basement in the gallery and do battle with Weiss Guertena, who had actually switched realities with April. Apis fights the Canvas Lady Elizabeth during the battle. After escaping the gallery, they take Mary's painting to Foster's Home For Imaginary Friends.

In Field Day!, Apis offers to play the "Cook It Up" game, but her team quickly stops her, knowing her terrible cooking.

In Sector MG, Apis watches as Mocha fights in Heaven's Arena. When Weiss Schnee is trying to cut Philip Blakely (in his mouse form), she accidentally cuts Apis's dress. Phil attempted to get Apis's attention, knowing she can speak to animals, but Gonbe starts trying to catch him. 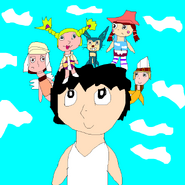 The W7 members on Mocha's head.

Gamewizard's 20th birthday pic.
Add a photo to this gallery

Apis is a cheerful girl who loves her friends, and very loyal to her religion. Recently, Apis began to lose faith in her religion, as many things disprove it, such as the existence of other elemental gods, and the fact her powers come from Bang Gas. However, she learned to stay loyal to her religion anyway, and regardless, she still accepts her friends even though they're all different. Apis gets annoyed when Chimney complains about her religion, but she still cares for her friend and prays for her when she's in trouble (much to Chimney's resent). She was also shown to like Legend of Zelda, as the game is about fighting demons.

Apis isn't very physically strong, but when she was 4, she inhaled some Bang Gas and gained the power to speak with animals, such as Chimney's rabbit, Gonbe. She's become as proficient as Nova or Arianna, as she can sense and command animals wherever, and have them fight for her. She was once able to summon a sea leviathan from the depths and make it release piercing rain.

Apis is later revealed to have slight plantbending powers, as she can communicate with the microscopic cells of plants and make the plants grow unnaturally and bind enemies.

"All the creatures of the Earth are my brethren."

Apis's Final Smash is God's Creatures, in which she folds her hands in prayer as swarms of animals charge onto the battlefield and stampede all enemies. It ends with a pterodactyl swooping down and clutching any random enemy before carrying it off.

If there were no animals around, Apis may be in danger, as she does not appear physically strong. Like most of her sector, she is unable to swim. However, if any sea animals were nearby, such as a giant seasnake, she could tell it to rescue her. Apis has also attempted cooking a few times, but is shown to be fairly bad at it.

Retrieved from "https://kidsnextdoorfanfiction.fandom.com/wiki/Apis?oldid=59892"
Community content is available under CC-BY-SA unless otherwise noted.